Introduction from Yves Hayaux du Tilly, Chairman of the Mexican Chamber of Commerce in Great Britain 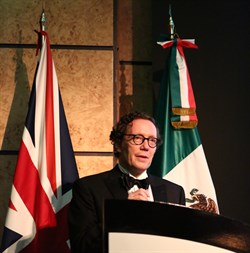 The MexCC represents the Mexican business diaspora in the UK, and UK business with interests in Mexico, providing support to Mexicans entering the UK market and British interested in the Mexican market, contributing through its network, platform and program of events to raise Mexico’s profile in the UK as a business and trading partner, and as an investment and tourism destination, promoting business opportunities in the UK and the City of London, connecting businesses and creating opportunities to its members and partner organisations to catalyse positive changes in the bilateral business agenda.

In coordination with its strategic partners, the MexCC actively promotes business opportunities for Mexicans in the UK and British in Mexico.

The MexCC and its members are pleased to collaborate with the IOE&IT in presenting you this second edition of IOE&IT’ S Doing Business in Mexico Guide.

This Guide contributes to the efforts being made in promoting Mexico as an investment and export destination, assisting those that are interested in expanding to Mexico in such venture and facilitating an invaluable understanding on the requirements to do business in and with Mexico.

Mexico is the second largest economy in Latin America with a territory of 1.972 million square kilometres and a population of 119 million.

Back in 1994, Mexico initiated a process to open its economy, embracing free-market policies that have reshaped its legal framework to facilitate and promote trade and investment.

Mexico has the world's 14th largest economy, with a GDP exceeding US $1 trillion. According to HSBC Bank's report "The World in 2050", Mexico will maintain a growth rate ranging from 3 to 5 per cent over the next 40 years and is likely to become the 8th largest economy in 2050.

Mexico has recently implemented an agenda of structural reforms to (i) further opening its economy to private, both national and foreign investment, mainly in energy and telecommunications, and (ii) improve its competitiveness, by approving mayor reforms in antitrust, data privacy, education, employment, financial services and rule of law.

Recent developments in both sides of the Atlantic have exposed the vulnerability of Mexico for having a highly concentrated trade with the US and in the case of the UK, to that with the EU.

Both, Mexico and the UK, are strategically located to boost bilateral and international commerce.

Mexico’s aggressive free trade policy has made it one of the most open economies in the world with an impressive network of free trade agreements giving access to trade through and with Mexico to 44 countries, and it is expected that the UK follows a similar policy post-Brexit.

It seems natural and it is expected that British businesses look into Mexico as a natural market for expansion and from there to Latin America, accessing new markets to compensate for any negative impact Brexit may have; and for Mexican business to diversify their highly concentrated trade to the US and expand into the UK and from here to other markets.

The MexCC is eager to work with the Mexican and UK Governments, their promotion agencies and their development banks, the City of London and professional organisations such as IoE, and our counterpart, the British Chamber of Commerce in Mexico, to help its members identify existing opportunities and turn these into profitable business.